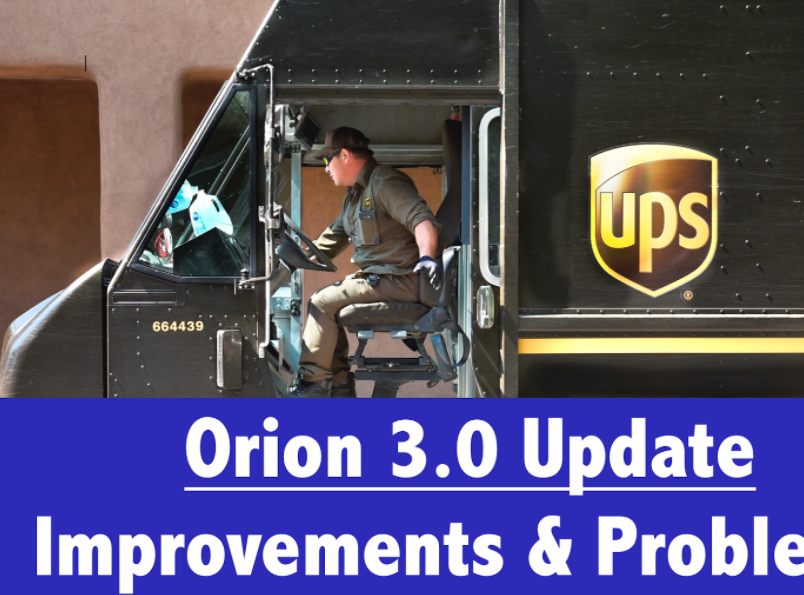 Route optimization has numerous benefits for every business in the world. UPS has noticed the positives of route optimization and taken them on board with the newest updates to their multi-billion dollar business. After introducing Orion, their On-Road Integrated Optimization and Navigation technology, UPS realized they need some more changes for optimal efficiency.

What makes route optimization software better than your average Google Maps? Well, route optimization is a foolproof technology that delivery drivers use to find the best possible routes for seamless and efficient deliveries. Instead of juggling multiple apps, maps, or road signs? Written directions?  to find the quickest path between fifty stops, professional delivery drivers simply plug the delivery data into their apps and the route is ready in seconds.

Efficient routes reduce driving time, which increases customer satisfaction. On-time deliveries make customers happy! Customer experience and satisfaction are some of the most important facets of every company and without a dedicated client base, many delivery businesses will fall to the wayside.

UPS knows this and has prioritized customer satisfaction by introducing updates to their in-house route optimization software, Orion.
‍

Where Did Orion Come From? Let’s Find Out…

Orion is an acronym for On-Road Integrated Optimization and Navigation, and is the product of years of investment, market analysis, and research. While first conceived in the year 2000, UPS didn’t get around to testing their software until 2008. It took another four years to develop a prototype, and officially launch its beta testing in 2013. Despite a lengthy rollout process, drivers found the app very unpolished in its early stages.

Illegal turns and a lack of appropriate breaks were commonplace on Orion’s routes. Drivers found themselves competing with the software, and winning, in “beat the machine” races. One driver recalls when Orion predicted a 140-mile route instead of his typical 155-mile route. He went out and completed the route in 135 miles.

This begs the question, would the driver have taken twenty miles off his average route length if he weren’t challenged by Orion?

The Benefits of Orion

Orion calculates routes by using numerous data points, such as the number of stops, start time, commute time, pick-up windows per location, and special customer requests (knocking on the door, coming to the back of the apartment building, leaving a package with the concierge, etc.). By factoring in these details, Orion can calculate the shortest distance between two locations, reduce fuel consumption to avoid idling time, and avoid traffic, reducing the likelihood of getting stopped due to accidents, rush hour, or construction on the route.

Orion also has the ability to use an online map that UPS specifically designs to help their workers on their routes, putting a priority focus on the time and energy of their employees. Turning their attention to a more people-oriented approach, focusing on the customer satisfaction levels and the employee satisfaction levels, UPS has made it more likely for customers to continue using UPS, while also improving employee retention rates.

The Delivery Information Acquisition Device (DIAD) is another part of UPS’ route optimization software. This handheld tool is used within UPS cars to help UPS drivers control the Orion app by hands-free use. Not only does this keep UPS drivers safe and focused on the road, but it increases the user-friendliness of the app to allow for all UPS drivers, regardless of technological prowess, to quickly and easily calculate and follow their daily route.
‍

What’s New In This Update?

By adding dynamic routing to ORION, UPS claims they can save an additional 2-4 miles per driver, per route. This minimal savings per person will add up to astronomical benefits and reduction of gas, wasted time, and energy by drivers across the board. Along with the original ORION already saving 8 miles per driver, the new update will increase the total mileage savings to 12 miles per driver - a remarkable stat that can lead to happier employees and a more effective delivery route.

So, what’s the main change? How did UPS enhance ORION to make drivers’ lives even easier? Well, instead of having to manually update their routes to the DIAD Device before they left the facility for their daily route, the route is automatically updated throughout the day. This means that instead of drivers having to spend extra time to upload their route, they can simply get started at the beginning of the day.

Along with reducing the need of manually inputting the data into the DIAD device, the new update means that any changes made to the route will automatically be uploaded to the ORION system. The automatic feature reduces the need for drivers to have to communicate with their local hub to notify the system of real-time changes within the route. Although this is a new update for ORION, efficient alterations like this have already been occurring with other route optimization apps - like Straightaway.

Finally, the update to the UPS ORION app is including the Network Planning Tools and Harmonized Enterprise Analytic Tool. The Harmonized Tool connects various data sources to analyze and see how packages are flowing through facilities and the UPS system. By seeing the big picture of how this new update operates, we can see how their investments and efforts have paid off in the long run.
‍

Despite the latest updates to ORION technology, there are some user complaints that have put a damper on the newest innovations. Even though UPS has broadcasted the reduction in driver mileage, focus on real-time package flow, and automatic route updating throughout the day, there have been some user problems that have virtually overshadowed the new technology.

Some of the most common user complaints (sourced from the UPS Brown Café forum) include the following subjects:

The New Orion is Here to Stay

Creating Orion has been an immense innovation for UPS delivery drivers and helped bring route optimization into the mainstream. Orion makes UPS more effective and productive during daily jobs, but it appears that the human factor is just as important. Drivers who follow Orion with 100% accuracy are bound to ignore some obvious time-saving solutions and might encounter some catastrophic errors such as arriving at a business after it’s closed. Regardless, Orion shows no signs of slowing down, so drivers should expect more updates to come.